Established in Marene (CN) in 1968 as Fissore F.lli, the business initially focused on sales and repairs of agricultural equipment and iron work for civil carpentry.

Over the years, the company strengthened its position on the local market, going on to increase production and broadening its range of machinery to include water pumps, hoes and snow blades. 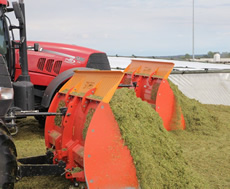 Following the departure of one of his brothers, Francesco Fissore created Mec.Mar in 1983, which, backed by passion and commitment, diversified its product range with new models, and stood up to competition from abroad by participating in numerous initiatives.

Year after year, company production and turnover have grown, and the business has gained consensus and credibility on both the local and international markets. In 2006, the company was reorganized and placed under the leadership of sons Valerio and Ivano; the original name, Fissore snc was reinstated.

In 2010, despite the international crisis and thanks to confidence in its own resources, the company moved to its new premises in the town of Cavallermaggiore.
Today, the technology and reliability of Fissore equipment are appreciated in many countries, with 40% of production exported to France, Spain, Switzerland, Germany, Greece, Hungary and Canada.
Our experience and ability to satisfy our clients' requests with professionalism and competence make Fissore snc a reference for companies in the sector.